The most wonderful excursions and walks in Val Badia

Here we'll recommend a few easy walks that are suitable for families while below you'll find a list of excursions in La Val, Alta Badia and in the Dolomites.

La Val - Cian - S.Barbara - Biei - Cians - La Val (approx. 2 hours)
From the parish church in the village you ascend the road in a more or less constant manner in the direction of Cians. From here there's a short track that crosses the meadows bringing you to the beautiful church of Santa Barbara. Continuing to the left you reach the hamlets of Ciablun, Runch and then Biei. You return along the same route.

Pederoa - Corcela / Badia (approx. 2 hours)
From the industrial zone in Pederoa a forest road approaches the river Gadera up to the crossing at the road which ascendingly takes you to the hamlet of Badia Corcela.

Armentara meadows
The Armentara meadows can be considered a huge playground for children and are the perfect place to relax for adults. From the carpark just before Fornacia o Colz it's possible to reach this paradise in just a short period of time and following path 15A it's possible to reach the slopes of Sasso Croce (Sas dla Crusc) or the sanctuary of Santa Croce.

Crusc da Rit (approx 4 hours.)
A great tour on the loop which begins in the hamlet of Fontanela in the village of La Val. Following path nr. 13 – 15 in the direction of Ju de Rit you cross forests and meadows with wonderful views of La Val and of Piz das Nü. Having reached Ju de Rit at 1836 m a level track takes you to Crusc de Rit at 2021m. Here the view of Val Badia, of Sasso Putia and of the Marebbe valley is spectacular. The return route takes you in the direction of Jù de Sant Anton passing Civazza as far as the hamlet of Pascà. From here passing Spëscia in the direction of La Val you once again reach the point of departure. 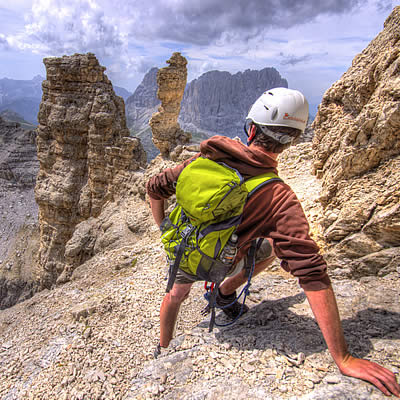