Holidays in La Val in the Dolomites

La Val – La Valle is a small village in Val Badia and part of the renowned ski resort of Alta Badia. Set into the green slopes of Sasso Croce and Cima Nove, the population is dispersed amongst several inhabited centres characteristic of Val Badia: Les Viles. Here you'll experience the real mountain atmosphere, the agricultural tradition, and the population's close bond to nature is palpable. And, with the Fanes-Sennes-Prags nature park, close to the Puez-Geisler nature park and not far from the two ski resorts in Val Badia, La Val offers infinite possibilities.

Recently, La Val became the first Italian village to have been awarded with the certification of "European village tourism", thanks to its numerous hiking paths of all levels of difficulty and the number of services dedicated to hikers. A hiker's paradise which is furthermore endorsed by the awarding of the Dolomites as a UNESCO World Natural Heritage site.

And there are plenty of typical restaurants, romantic huts in higher altitudes and artisan shops. These can be found in Pederoa where it is a delight to spend some time going shopping.

The tradition is perceivable in La Val especially when events are on such as "Sons y Saus", where on the fields of Armentara, Ladin specialities are served with the backing entertainment of musical folks groups. Armentara's meadows could be considered the flower of La Val's eye, with its paths of rare beauty and the extraordinary variety of species of orchids and animals.

What are also worth mentioning are the meadows at Rit, the chapel of Santa Barbara and numerous other natural beauties awaiting discovery. 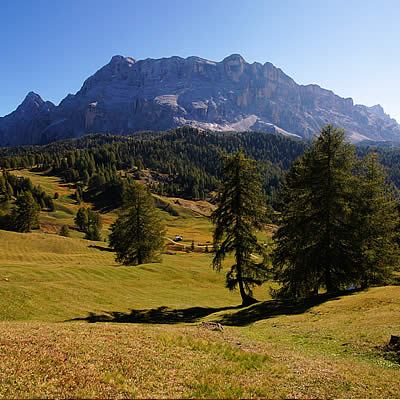