The season for hiking and relaxing outside in the fresh air

With the spring awakening of nature until the autumn winter, Alta Badia, and even more so, La Val are true hikers' paradises. It's no coincidence that since 2015 La Val has been the first village in South Tyrol to have gained access to the "European village tourism" group. The spectacular magnificence of the Dolomites ranges from wonderful landscapes to larch and fir forests, clear freshwater streams, meadows in bloom where you'll find some huts as well as the centuries old barns and stables. Returning to the village of La Val, the characteristic farms of the "viles" pay homage to the history and tradition of the Ladin population.

A spectacular backdrop which if seen from close up remains unforgettable. Amongst the nicest places for your walks there are the meadows at Armentara, which extend from the foot of Sasso Croce and which represent the botanical garden of La Val, the meadows at Rit and on the opposite side close to our agritourism Chi Jus. And there's almost an infinite number of peaks that you can conquer, the option of spending a night up at a hut in high altitude as well as the thrills of a fixed aid climb.

Alta Badia reveals itself in a special way with regards to cycling. For mountain bike lovers there really are plenty of kilometres of paths and forest roads in close contact with nature, whiles for racing bikers, the roads taking you to passes such as Passo Falzarego and Passo Gardena certainly have plenty to offer. Roads and turns which have shaped the history of cycling and host the annual international event called "Maratona dles Dolomites". The Sellaronda Bike day on the other hand is a perfect opportunity to complete the round trip of the Sella by bike on roads that are closed to the public.

Climbing up alpine routes or on the valley's rocks, horse-riding, paragliding flights, these are but a few of the activities that you can undertake in Alta Badia. Furthermore, the main cable-cars are also open in the summer allowing you to reach unforgettable places without having to exert too much effort. And there are plenty of structures in place for families too such as the adventure park at Colfosco and the Movimënt park. 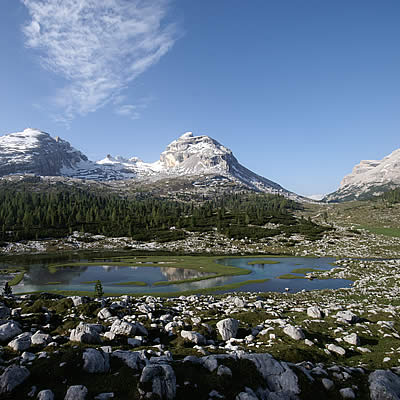